The following section details the framework used for post processing the data in the iScape project. 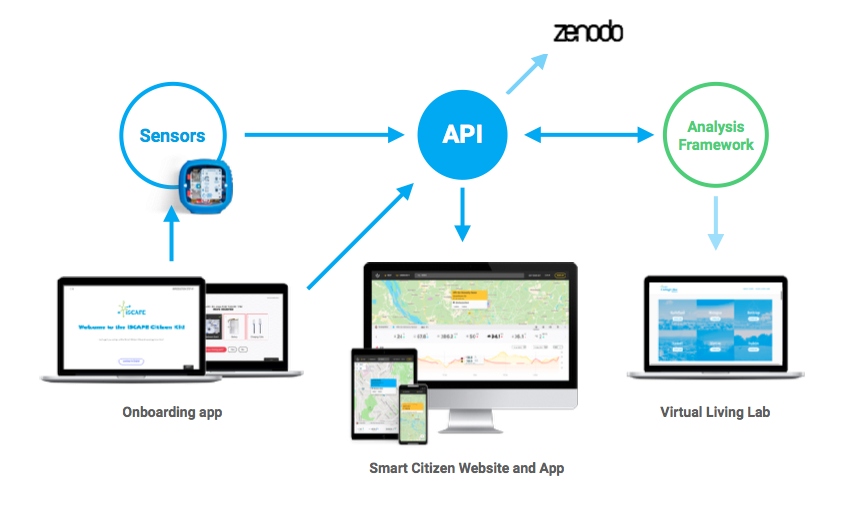 Based on Jupyter Notebooks and running Python and R, it is intended to provide an state-of-the-art data handling and analysis framework, which can be easily expanded for other use cases.

The Sensor Analysis Framework is mainly used to handle sensor data acquisition and apply sensor models for actual pollutant concentration calculations. In the following sections, we detail the principles of low cost sensor calibration that we follow, as well as the usage within the framework.

All the files and notebooks related to this document can be found online in our Github repository.

Generally, the sensor data is ingested in the Sensor Analysis Framework directly from the API, or by inserting it via csv. As detailed in the Low Cost Sensor Calibration Section, each of the sensors is treated differently, and some of them require more analysis than others, e.g.: the Metal Oxyde sensors vs the electrochemical sensors.

The framework can be used to process the Living Labs Station's data, loading the data and applying tailor made algorithms for the sensors within: 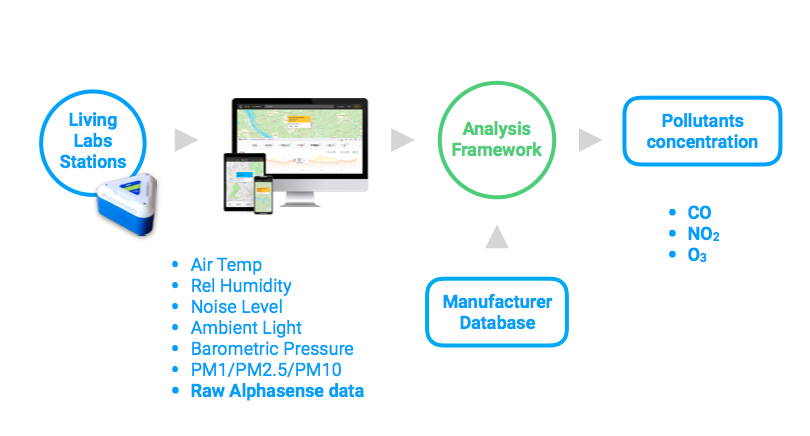 Additionally, the Framework can be used to load in data from the Citizen Kit's sensors and used to generate models and analysis based on other references, following the diagram below: 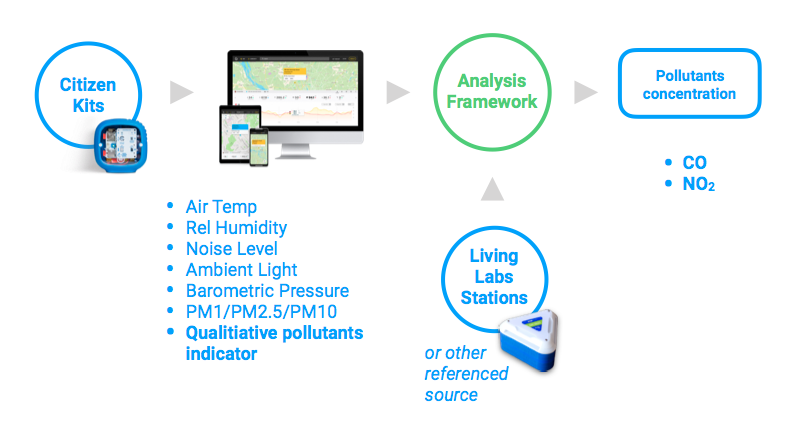 Similarly, this approach can be used to improve the Living Labs Station's data, where known effects from temperature or humidity can be input as corrections for the models generated.

Finally, all the models generated are stored and can be easily loaded from the Github Repository.

The structure of this framework can be split between two main areas: one dedicated to sensor data analysis and model generation; and an automated sensor correction script that recovers sensor data from the API, processes it, and posts it back to the API with the use of the results obtained in the data analysis. This structure is decribed in the following diagram: 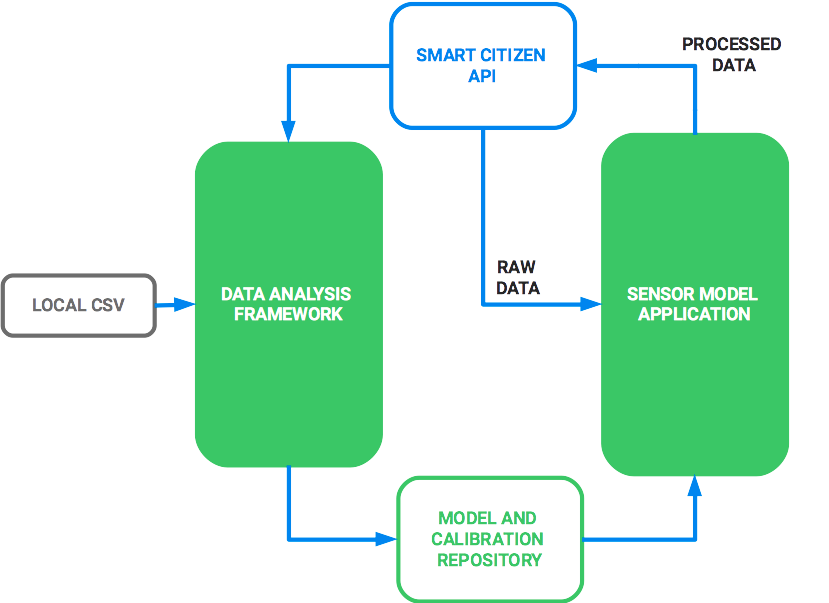 Furthermore, within the sensor data analysis, a notebook and several scripts are included, intended for modeling and data visualisation, including exploratory data analysis and a testing environment for sensor model calibration. This includes interfacing with the SmartCitizen API in order to download available sensors from the platform, as well as local csv analysis. Further functionalities are explained in the following sections.

The main component of the Framework is a Jupyter Notebook with the following features:

An example of the workflow can be seen below: 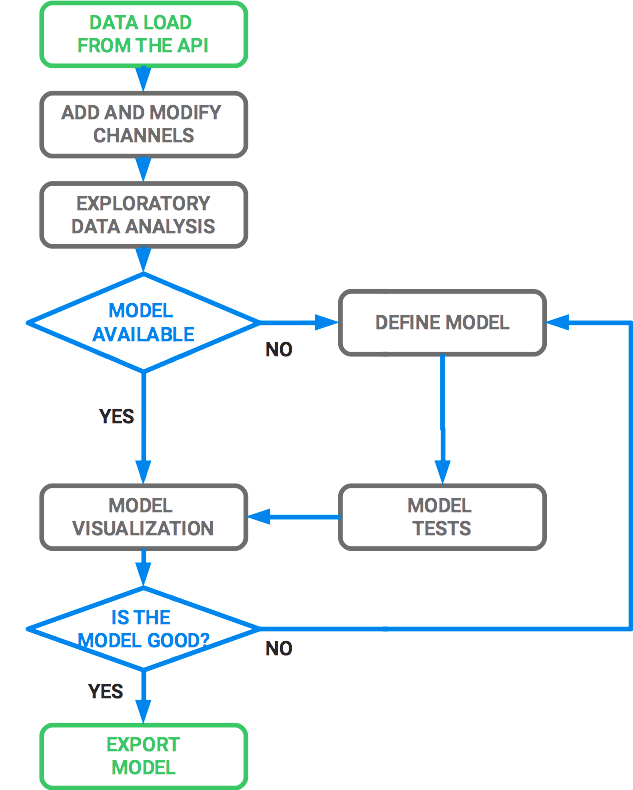 As mentioned, data can be downloaded from the SmartCitizen API with the KIT IDs or using local csv. In order to tidy up the data, the recordings are organised around the concept of test, an entity containing all the kits' references, sensors and general information regarding the conditions at which the measurements were carried out:

A brief schema of the test structure is specified below:

All this structure is filled up at the test creation with a dedicated script, saving future time to understand mismatching reading units, timestamps formats and so on.

Finally, the devices' data is stored as Time Series data, with DateTime index in ISO8601 format. This is an important consideration for data visualisation and posterious modelling.

The device's data can be quickly analysed using a simple interface in order to quickly select the desired channels and timeframes. Some of the functionalities already included are:

The data models section includes an easy to use and full interface to select data from different devices within a test in order to calibrate different models. Since the data is mainly based on Time Series analysis, it interfaces with common statistics and machine learning frameworks such as sci-kit learn, tensorflow, keras, and stats models. These frameworks provide tools to perform:

An example of the model is shown below for the estimation of the SGX4514 CO with the use of the rest of the Kit's available sensor, using a single layer LSTM network only two weeks of training: 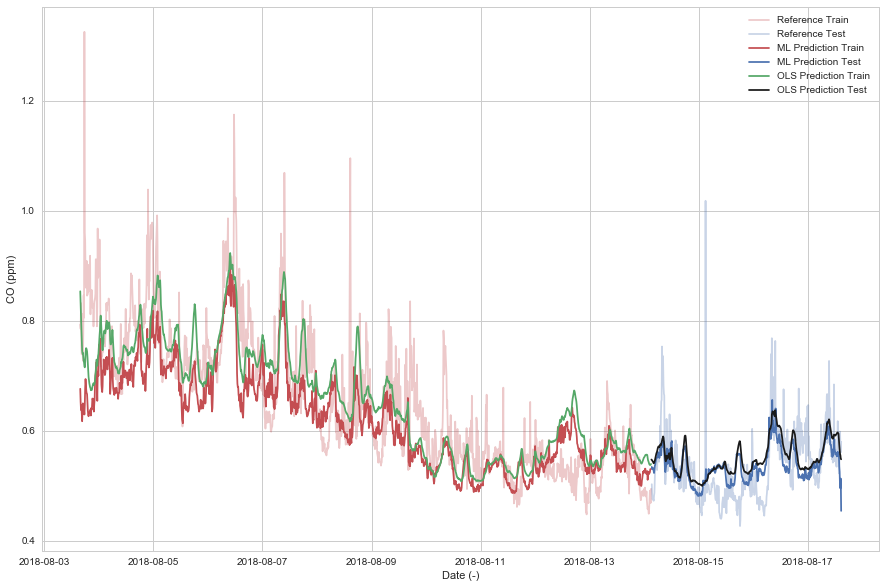 Depending on the model selected, different validation techniques are implemented, in order to verify models' assumptions and avoid data misinterpretation (i.e. Durbin Watson or Jacque Bera test for linear regression). Finally, it is important to follow carefully the instructions as stated in the notebook, in order to avoid low model quality.

Once the model is analysed and validated, it can be saved and exported. This allows using the model in the future with the same variables in other sensor studies. The model objects are serialised with joblib and can be uploaded to the Models Github Repository for later use.